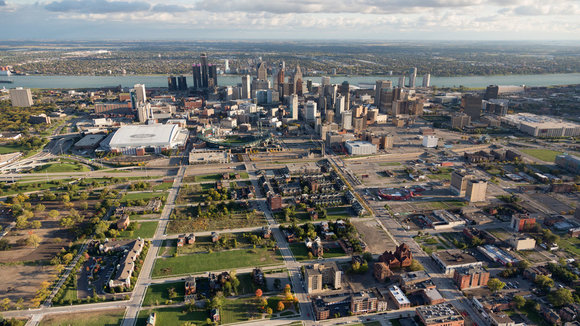 Stepping onto the streets of Detroit these days, the effects of the spirited resurgence in flight is not difficult to see. It has been a long road for the residents of the Motor City, particularly for those battlefield heroes who stayed behind with a resolve to carry the torch.

Today, the waves of artists, entrepreneurs, and curious newcomers who arrive to plant their own roots are, in great part, drawn to the sense of community and grassroots efforts founded by a few unrelenting community activists.

Here are 3 Women Activists whose palpable contributions are raising the old Detroit into the new.

These are the three rules for pitching an idea at a neighborhood Soup, says Amy Kaherl, founder of Detroit Soup, a crowd-funding monthly dinner aimed at empowering residents to share ideas they believe can improve their community.

Each month community members attend a Soup, paying their $5 fee at the door to sit down, eat, and converse with other members of their neighborhood. Throughout the night, selected individuals each take four minutes to pitch their Powerpoint-free idea to community diners who then can ask 4 questions before they vote on who takes home the proceeds from the door.

Now what started as a way to empower and support grassroots solutions has grown into a worldwide movement helping marginalized communities own the change they want to see.

"The Kevin Bacon of Activism"

A true die-hard Detroiter, Monique has never given up on what her hometown can be and it shows. There are very few conversations about social movement in Detroit that will not lead to Monique.

On any given day she may be hosting professional development events helping people finesse their elevator speech, working with committees like the Community Benefits Ordinance to ensure residents have a say in how investors do business in Detroit, to helping her own neighborhood of MorningSide to take action in the quest for adequate internet access.

For any Detroiter involved in community activism, Monique Tate is one spirited lady you will eventually meet, and be grateful for knowing.

There are many names for Marsha floating around the D. She is "The Original Hipster”, “A Living Legend”, the “Living Artist”, and the “Madame of Detroit”. The daughter of a renown Blues and Gospel record seller and producer, Marsha grew up amidst the blues, the white flight, and now the gentrification of Detroit. For this self-proclaimed griot, and recipient of the 2015 Knights Art Challenge, the real history of Detroit flows through her veins.

In her blog series entitled “A Grown Woman's Tales from Detroit”, Marsha shares the heartfelt anecdotes of the Detroit that has helped many newcomers understand the importance of the sociological, educational, and racial issues presiding the historic fallout.

Marsha Music has the resolve to unify a new Detroit that honors its past legacy and offers one valuable piece of advice for any Detroiter-in-training: Just Say Hi!