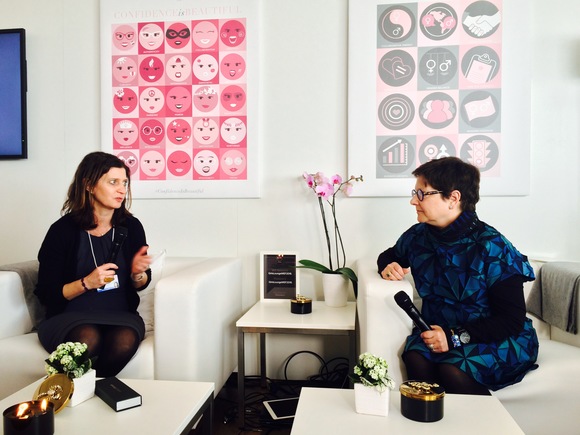 The wintry terrain in Davos is on fire and brimstone with high-powered discussions on gender parity in the workplace. This year, the World Economic Forum annual meeting’s official attendees consist of 18% women. Similar to previous years, a number of sessions focused on gender balance, family, and female leadership and mentorship are unfolding at the event’s Congress Centre, where many of the 18% are participating with the male 82%. But this time the conversation around women at WEF is different. This time The Girls’ Lounge is in town.

A few yards down the snowy promenade from Congress, Shelley Zalis and her team have set up The Girls’ Lounge for women at WEF to connect and discuss how to accelerate the advancement of women at work to achieve gender balance. An initiative seasoned in bringing women together at conferences across the globe, the Girls’ Lounge is proving to be a go-to destination for women in Davos to relax, reinvigorate, share stories, and determine how to take action.

According to the LeanIn.org and McKinsey & Co study, “Women in the Workplace,” women are still underrepresented at every level in corporations, and their stance is that the playing field is tragically imbalanced.

On January 20, WEF’s kickoff day, The Girls’ Lounge featured powerhouse speakers including Tina Fordham, Managing Director and Chief Global Political Analyst at Citi, Vivian Reifberg, Director at McKinsey & Company, Intel’s Diversity Chief, Roz Hudnell and Ernst &Young partner and leader in EMEIA, Julie Teigland. While each of these executives shared their personal and professional views on what’s needed to push gender parity forward, three thru-lines were clear among all of them, including the need for the following:

During her talk, Julie Teigland made a vital remark. “There’s no lack of data. There’s a lack of action.”

On day two at WEF, The Girls’ Lounge resumed with gender-driven workshops and discussions. Wall Street Journal Deputy Editor in Chief, Rebecca Blumenstein, shared some insights she gained from the 2011 and 2012 Women In Econ conference, research lead by McKinsey & Co, and her own observations.

“I have seen many more men taking paternity leave,” said Blumenstein. “These are personal decisions, but one of the most interesting findings in our research is that women became more ambitious when they started having kids. There are a lot of women in what I call the 'messy middle', who are just making it work. But instead of looking at it [pregnancy leave] as a detriment, I think you can look at it as a positive.”

Paternity leave isn’t the only topic where Blumenstein has seen data converse to many pre-conceived, societal notions. Education is another distinct area undergoing change that isn’t being talked about enough.

“What we’ve learned is that young women are really outpacing men in all levels of education,” said Blumenstin. “That’s continuing through college. I do think that that’s progress and there’s more progress than people realize.”

What do you think? How far have we come and how much further do we need to go to achieve true gender balance—the kind that’s embedded into corporate culture at the core—not as a corporate social responsibility initiative?

Here are some social media highlights from the last two days. You can join the conversation by using the hashtag #TheGirlsLoungeDavos.

[View the story "Confidence Is Beautiful " on Storify]