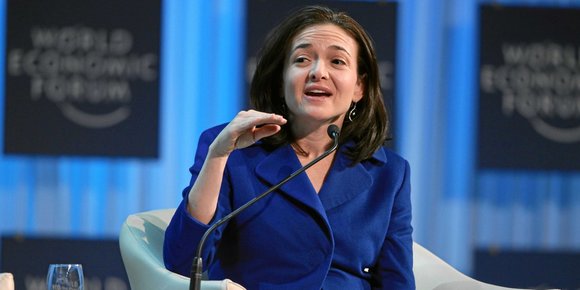 Gender equality in the workplace was among one of the most heated topics at the World Economic Forum's annual meeting last week. From the main stage in the Congress Centre to side activations like The Girls' Lounge, some of the most powerful C-level executives in the world weighed in on the unconscious corporate and cultural biases pervading society, what businesses can do to even out the playing field, and why the world can no longer wait to take action.

During WEF's Progress Toward Parity session, Facebook COO Sheryl Sandberg said the world is suffering from a "toddler wage gap."

"We assign our chores to our children in the United States, and it can be worse in other parts of the world, where the boys are taking out the trash. "It takes less time than cleaning the dishes and they’re [boys] are getting higher allowances. And, so we start out in our homes with these very different expectations and the time spent on these tasks is incredibly important."

After a CEO-fused chat at The Girls' Lounge, Bob Carrigan, the CEO of Dun & Bradstreet, said that mining data is one of the best ways to move forward.

“I think the awareness around gender equality and diversity overall is higher, but the actual results haven’t improved as much as I thought they would have by now. So that’s where the importance of measuring results comes in, and actually benchmarking the number of female employees and female executives and females in the talent pipeline. I have a dashboard of KPIs around diversity. You can’t expect what you don’t inspect. Amazing things happen when you start to measure."

Grameen America CEO, Andrea Jung, stopped by The Girls' Lounge to share her journey to leading the fastest growing microfinance organization in the United States, and shared why alleviating poverty is crucial for achieving gender justice.

"The playing field is uneven even within poverty. So the disadvantage and the inequaltiy is obviously a huge problem for for billions of people on earth. But women are disproportionately affected and disproportionately lacking access and opportunities. My own personal opinion is that when we address this then the opportunity is also going to be disproportionate because once we figure out the math there’s going to be an even greater economic engine unleashed."

Alan Murray, editor of Fortune Magazine, joined participants at The Girls' Lounge to explore what the media can do to get more women in the talent pool in corporate America.

"The number of women who are Fortune 500 CEOs is pathetic. It’s a lot better than it was in 1997...The problem with Most Powerful Woman is that it’s only helping the women who have already made it. It’s not addressing the pipeline. So what we’re trying to figure out is how Fortune can reach down that pipeline. We started something called Next Gen, which is a start in that direction, but I don’t think it’s a big enough step. So we’re starting to have conversations about how we can provide those same kinds of opportunities for other women. Because men have all kinds of opportunities."

After the final CEO session of the week at The Girls' Lounge, eBay CCO, Daniel Tarman, said while he's seen improvements in gender equality over the years, there's still a long way to go.

What do you think companies and business leaders should do to be more inclusive and get to the root of unconscious bias?
comments powered by Disqus