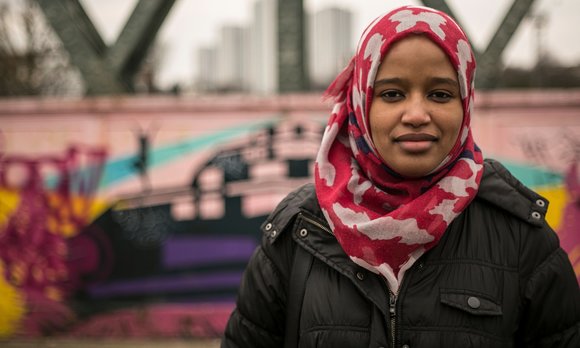 A guard at Yarl's Wood Immigration Center is overheard saying this on the shaky-cam footage taken by Jackie Long's undercover team for the documentary Inside Yarl's Wood. Located in Bedfordshire, the "removal" center houses migrant women and children considered undesirable to the United Kingdom. Vitriolic temperament is epidemic among guards.

"They're animals. They're beasties. ...Take a stick in with you and beat them."

"Let them slash their wrists."

"They're never slim and petite and pretty."

This exposed reality exists just 50 miles north of London, and it became the reality of Mariam Ibrahim Yusuf, who fled Al Shabaab's terror regime in Somalia to arrive in the UK in 2008. The perilous journey on foot separated her from her children. Six years navigating the UK's complex asylum-seeking process began with Yarl's Wood. "I asked [another detainee] 'Is this a safe place?' 'No, this is jail.' 'I have committed no crime, why am I in jail?'"

Mariam and Jackie were brought together to be honored at last Friday's annual Woman On the Move Awards. The evening celebrated inspirational leadership among refugee women in the UK, their contributions and their allies. Held in conjunction with the Women of the World festival, which broadly highlights global gender issues, the event was organized with the support of UNHCR. Mariam, now a championing voice for victims of female genital mutilation, was awarded Woman of the Year.

WOMA reinforces that refugees are not seeking British benefits. Many dream of returning to once-peaceful homelands, where they'd built businesses and raised children. They wish to integrate into UK society with dignity, to lead lives of purpose that have futures.

Seada Fekadu, winner of the Young Woman of the Year Award, exemplifies this. While the NHS faces staff shortages, she hopes to become a surgeon. Her unbridled passion for helping people and her optimism for the future reflects her journey from East Africa. At just 16, she traveled unaccompanied to UK, braving the Calais Jungle in France. Obliged to learn English quickly so she could enroll in college, Seada shows no trace of frustration, when many of us resent much thinner inconveniences: a botched coffee order or delayed train. Her unbreakable resolve and willingness to fill in much-needed gaps is not rare among refugees, but it's often left out of the discussion. Refugees are prejudicially branded as a drain on economic resources and a plague to the labour market.

But Seada, now 18 and graduating with distinction, has a wide heart and iron will informed by her experiences.

"The hardest [memories], I let them go, because I want the space for good things. ... I want to become a doctor, because I want help people. ...I know saving  a human life is not easy, it takes dedication and time and I am willing to do that."

She was awarded for her work with Young Roots, a migrant youth group that helps refugees acclimate to the UK through peer activities and support schemes. Once a member herself, Seada now sits on the Board, where she "brings a voice of experience to [their] internal work... [through] incredible energy and drive to help other young asylum seekers." These young people face "many challenges, including language barriers, lack of education, social isolation, economic hardship and navigating complex legal and care systems." But, Seada says they take it on because, "Their common goal is to be safe and live their lives."

Young people are especially at-risk on migrant journeys. Over 10,000 minors have gone missing in recent years-- 5,000 in Sweden alone, another 1,000 in Italy. Many of them are thought to be trafficked or sold into slave-labour by European criminal gangs.

These are difficult truths. But awareness of Europe's own abuses, as close to home as Yarl's Wood, can help us understand why the continent is a last-ditch effort for refugees, not a first resort.

Fear-mongering political focus on the dangers asylum seekers bring to Europe rarely addressed the menace refugees themselves face upon arrival. Ultimately, the risk is worth the reward: an opportunity for growth, not stagnation, and not freebies. The journey of hundreds of miles stands testament to refugees' willingness to achieve, and inherently rejects "lazy migrant" rhetoric.

But, as WOMA's Zrinka Bralo points out, change in that narrative may be on the horizon. "Refugees Welcome. We've got a hashtag, we've got a tee shirt. And we're not going away. ...[We're] inspiring our government to think beyond barbed wire."

The journey towards humanising migrants begins by exposing current human rights violations, and ultimately ends with the celebration of successes like that of Seada and Mariam. They don't want handouts-- they want lives of dignity, as "survivors, not victims."

"We are not here for British benefits. We are here to be safe and to be free."