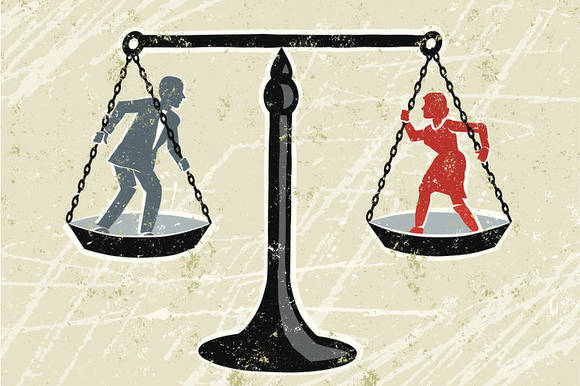 Last week at the Let Girls Learn Event Celebrating International Women’s Day, First Lady Michelle Obama gave a moving speech on some of the more significant legal shifts concerning women issues. Obama highlighted the unfortunate realities of our not so distant past.

"In my lifetime -– and I’m not that old -– it was perfectly legal for employers to discriminate against women.  In my lifetime, women were not legally allowed to make fundamental decisions about their bodies –- and practically speaking, many still can’t." -Michelle Obama

These days, it's hard to miss a headline around the issue of gender equality. There are campaigns, movements, hashtags and videos; a slew of media attention, and rightfully so. In parts of the world, women and girls still face deplorable circumstances and sometimes a complete absence of basic human rights.

In the developed world, the gender equality battleground is a bit more nuanced with more subtle tactics needed to combat discriminatory practices, residuals of antiquated infrastructures and belief systems from the not so distant past.

The release of Mercer's When Women Thrive study revealed a sudden decline of growth of female professionals somewhere in the middle of their career cycle. It showed that men and women entered the workforce at very similar wage averages, which implies parity. But over the course of 10 – 15 years, women were earning less. Moreover, there was a notable decline in the presence of women in the traditional workforce. 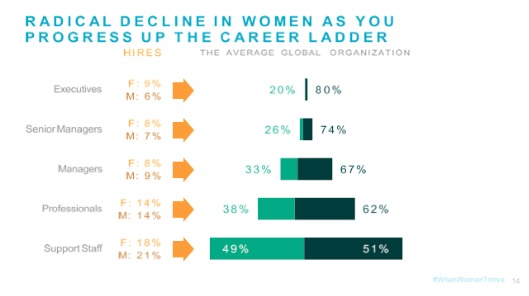 Data is a powerful tool, but only if we dig deep enough to see the correlations.

Even more disconcerting was a widely publicized political ad asserting that women earned only 77 cents for every dollar earned from their male counterparts. Combined, these broad findings create a troubling picture of the workplace. However, these figures are not entirely correct, nor do they completely help us understand why women are leaving.

Data is a powerful tool, but only if we dig deep enough to see the correlations.

What does the data surrounding the wage gap really tell us?

To be clear, data experts are in complete agreement that a gender wage gap exists. However, it is not as cut and dry as the 23% gap derived from the 2013 Census Bureau, which only compared median annual earnings of full time women workers to that of men to determine the wage gap.

A breakdown of earnings by education, background, and workforce participation from the Bureau of Labor Statistics actually found the gap to be closer to 13%. In certain industries, women are closer to a mere 5% difference in earnings. This subset, however, consisted mostly of single women without children in comparison to their male counterparts most of whom were married with families.

While it is clear that a penetrable wage gap exists, it is not as large as it may seem at first glance. The findings from the Bureau of Labor Statistics also concluded that women were choosing other jobs with less pay, and less responsibility.

Is the answer that women simply choosing to leave the workforce to start families?

The reasoning behind the choice

According to a survey conducted by the Harvard Business Review, 77% of nearly 10,500 professionals also believed that women were choosing to “opt out to have children” and this was the reason for their career shifts. This assumption was one that both men and women held.

Interestingly enough, 61% of women did claim family as a reason for leaving when first asked but when researchers dug deeper into their work life satisfaction, they found that actually only 11% left the workforce exclusively for child-rearing reasons. For the rest, researchers found that when women did choose to leave the workforce it was a “last resort because they [found] themselves in unfulfilling roles with dim prospects for advancement.”

Not surprisingly, women leave for much of the same reasons men do: management, work/life balance and corporate culture. This most certainly alludes to the lack of available paid parent leave and the need for adequate succession planning for temporal leave without penalization. 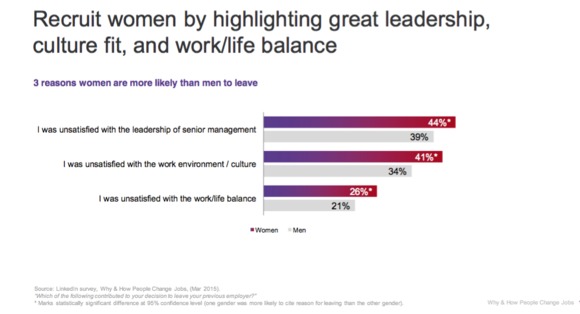 Even though women generally showed higher percentages of dissatisfaction in each category, the numbers were larger within the categories of senior management and corporate culture/environment.

Who is at fault?

Here's where things get dangerous. Our natural inclination is to determine who is responsible and who is to blame.

If nearly 63% of manager level positions are held by men in an already male dominated environment, then are men the problem?

While sexism and discrimination still exist in the workplace, the blame and the need for change cannot solely sit on the shoulders of our men who are oftentimes standing along side us.

The biggest threat to gender equality is the constant use of the words gender equality as it relates to women as a special interest group and men as the obstruction to progress. Equality is not just a gender issue, it is a human one.

The reality is that if 90% of our decisions stem from our unconscious bias', then we all come to the table with some sort of gender-based stereotypes.

What are some of the mindsets and bias' undermining men and women professionals in the workplace? And what are the tools and resources we can use to break through the barriers holding us back from real equality?

Follow our three-part series, "The Messy Middle of Management", exploring the important data and behavioral issues that we must take into account and understand on the road to gender equality.

Check out our Messy Middle Toolkit on Assessing, featured in our Part 1 of the Messy Middle of Management Series. 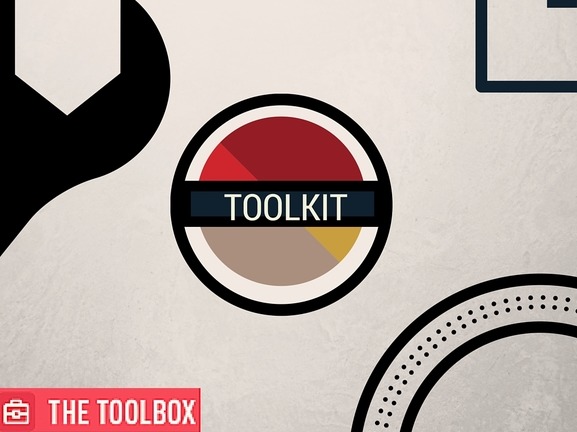