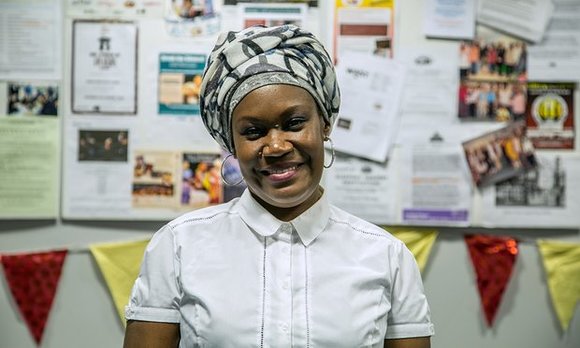 This post was originally published on The Guardian, by TheToolbox.org Co-Founder Melissa Jun Rowley.

Mariam Ibrahim Yusuf migrated to the UK from Somalia in 2008 to seek asylum from the war and gender-based violence in her country. She thought her two children would soon be joining her, but after eight years, she is still separated from them, submerged in the asylum system, and homeless.

While these hardships are heavy, they do not weigh her down. Mariam campaigns for the rights of other female refugees who want to rebuild their lives, and was recently honoured as Woman of the Year by the Women on the Move awards, which celebrates exceptional contributions by migrant and refugee women to UK society.

“Some of them [female refugees] have lost their self-esteem from what they suffered back home, the trauma,” says Mariam. “I help them to gain their confidence so they can integrate into society. When I go out and speak to the community to create awareness, I act as a role model. They can see that I can use my voice. They want to be like me.”

During the 2008 tribal clashes in Somalia, Mariam’s father paid an agent to take her to the UK. She claimed asylum in Liverpool, and now lives in Manchester, housed by the Boaz Trust, a charity that looks after destitute asylum seekers.

That year also marked the last time Mariam saw her two children, whom she left with her father. The Red Cross tried to trace her children in Europe, Kenya and the UK, but wasn’t able to find them. “When my dad paid the agent he wouldn’t let me bring my children because he didn’t know if where I’d be going would be safe,” says Mariam. “My son was born in 1994, my daughter in 1998.”

According to the United Nations, more than 43 million people worldwide have been displaced as a result of conflict and turmoil in their home countries. Approximately half of all refugees are women, and about 41% are children.

“The media say we come to take benefits, but that’s not the case,” says Mariam. “Asylum seekers go through a hard journey. I’ve been homeless for three years with nobody to help except charities that offer support. Already you’re traumatised and broken and destitute, and the media plays a part in tarnishing your name. So the community thinks you’re coming here to take their jobs, while you’re suffering.”

In addition to her public speaking, Mariam is a member of Women Asylum Seekers Together (Wast), a group of women across nationalities that bands together to raise awareness about immigration injustice and the underreported problems that force women to seek asylum.

When asked what has been the most surprising thing to Mariam since she’s been in the UK, she says: “Women are so free here. Back in my country women are not supposed to speak. They have their place. Here [in the UK] you can go to school. You can work, and you can speak out. If women are given that opportunity they can go further.”

Mariam adds that during her first four years in the UK, she waited for things to be done for her because she wasn’t accustomed to having responsibilities, let alone the freedom to lead her life the way she wished. But when she arrived in Manchester from London, and she was given the opportunity to help people, she grabbed it with both hands. This is a far stretch from anything she experienced in Somalia.

“In Somalia, if there’s something wrong like domestic violence, or if you have a problem with your husband, you don’t speak out,” says Mariam. “You can be physically and emotionally abused, but you cannot tell anybody. Society does not allow it. You take orders. If you have an opinion you have to die with it.”

One of the biggest injustices Mariam says women face in Somalia is arranged marriage. As soon as a marriage is made legal, a woman becomes the man’s property. Hence, so many women flee from such situations and seek asylum.

Mariam wants the media to know that it can use its reach to protect women and help them recover from their trauma, and that she’s grateful for the recognition and the amplification of her message. “I go about doing what I do just for me and other women,” says Mariam. “Somebody out there noticed, so that gives me pride and the knowledge that I can continue.”