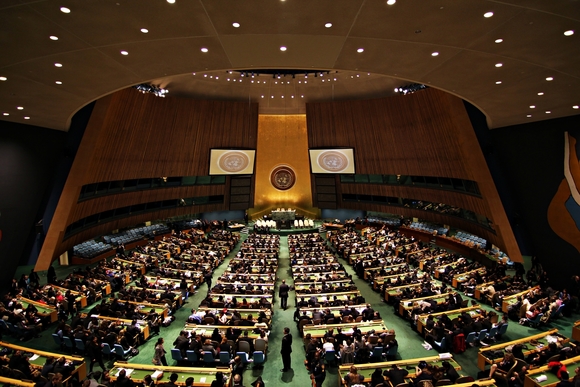 On April 19-22nd, the United Nations will be holding a series of high-level meetings in New York City. TheToolbox.org team will be on-site, reporting from the Digital Media Zone: a live newsroom featuring journalists, bloggers, and social media influencers from around the world. The DMZ will be collaborating to highlight the most important segments of the UN meetings, as well as hosting live interviews, active discussions, and panels around the event. Engaging a global audience, it will bring in-the-moment news directly to online readers, opening up UN dialogue to make the conversation accessible to everyone.

It is the second time TheToolbox.org team will be collaborating on the DMZ, after its initial takeoff in December for WSIS +10. The lounge will feature free wifi, a live-stream of the UN meetings, and workspaces for journalists and bloggers. TheToolbox.org will be joined by the DMZ's founder, the PVBLIC Foundation, and a number of top influencers. Discussions will be facilitated with UN delegates, celebrities, experts, and CEOs. TheToolbox.org Co-Founder, Melissa Jun Rowley, will be helping to emcee.

The DMZ will also feature panels, presentations, and the announcement of new initiatives. "Present Your Solution" will be a special panel, aimed at discussing how innovations in technology and media can connect people worldwide, aiding in the education and communication around current events. A core philosophy of the The Toolbox is technology's role in achieving social good: the DMZ will be taking a curated look at how telecommunications and apptivism have been helping to achieve the UN's Sustainable Development Goals, and what their future use may grow to be. The DMZ will encourage a greater dialogue around the role of technology in social good, through the accessibility created by technologies used during the event, from live-streaming to mapping.

At this April's meeting, the main talking points will be the UN's Sustainable Development Goals, the World Drug Problem, and the COP21 Climate Change platform. The President of the General Assembly will be chairing a thematic high-level debate around achieving the SDGs, and there will be a Climate Change Signing Ceremony, in accorance with the Paris Agreement. A Finance for Development Forum will also be taking place.

TheToolbox.org looks forward to reporting to you live from the DMZ.