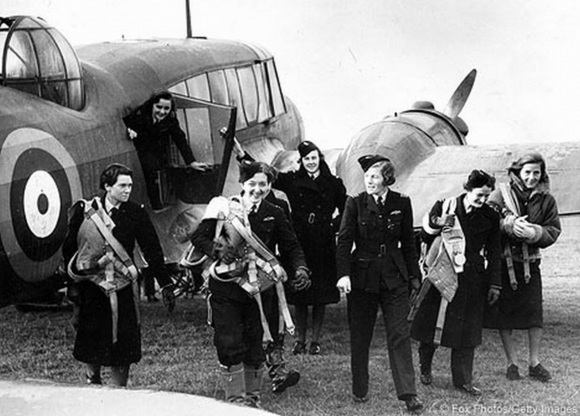 There are nothing blue skies ahead for the female veteran pilots of World War II.

Known as the WASPs (Women Airforce Service Pilots), over 1,000 American women rallied to the war effort by enlisting. Though women were officially barred from the military at this time (though female contributions in munitions factories, on the front lines as doctors and nurses, and as resistance fighters, underground rescuers, spies, and Special Operatives was as invaluable as it is largely unrecognized), the WASP women volunteered to work ferrying planes, towing gunnery, and as instructors-- even testing brand new plane models, before they had instruction manuals.

Although thirty-eight women died in the service of their country, and WASP women were given no veteran benefits, which should have included a proper interment in Arlington National Cemetery alongside their male military counterparts. Many WASP women even had to chip in to pay for the burials of their friends, carrying the caskets themselves, and delivering the news in person to families.

After decades of lobbying, their cause has finally been given justice. In 1977, the WASPs were given veteran status, though still barred from proper burial. In 2009, they received the Congressional Gold Medal. Yet still, this natural right was refused to those who were legal veterans.

Over 178,000 signatures on Change.org, plus the determination of Tiffany Miller and her sisters (granddaughters of WASP Elaine Danforth Harmon) changed all that.

Representative Martha McSally of Arizona, the first woman pilot to fly combat missions for the US military, introduced a bill to allow the internment of the WASP pilots to Arlington, where they belong, after being touched by the petition and its cause. And on May 21st, President Obama signed off on it.

TheToolbox.org team, who are proud supporters and promoters of the petition and of the WASPs, are proud to see justice for these brave women finally served.

More sunshine and clear skies will be on the way, as up next, Oscar-nominated Director Matia Karrell will be bringing the WASPs stories of heroism and heartbreak into the main stream through her Band Of Brothers-style miniseries, FlyGirls. It will follow the lives of these remarkable women who fought against all odds at home to help their troops abroad, in a time where women were barred from even holding a commercial pilot's licence.