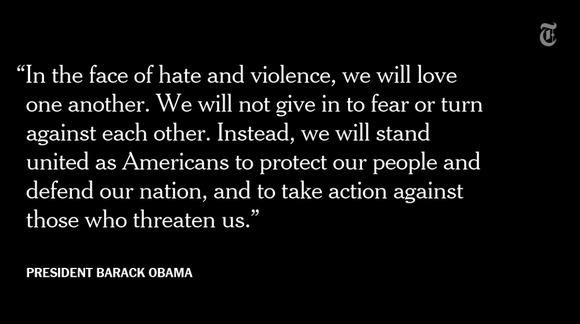 What's being hailed a the worst mass shooting since Virginia Tech (in other words, in recent US history) has left at least 50 people dead and another 53 wounded. The tragedy struck at Pulse, one of the biggest LGBTQ nightclubs in Orlando, Florida. The venue was holding a Latin-themed party when a man suddenly opened fire. Officials have identified the gunman as 29-year-old Omar Mateen, who was killed on site after taking hostages at the club, and allegedly pledged allegiance to ISIS before making the attack.

Investigators have confirmed they recovered a handgun and an AR-15 type of assault rifle from Mateen. News of the massacre is igniting conversation around a number of controversial issues in America, namely the importance of standing by the LGBTQ community, ISIS, mental illness—and of course the story that continues to make headlines without any solutions—gun control.

Today marks the 18th time President Obama addressed the nation about a gun-created tragedy. According to Vox, the US makes up about 4.4 percent of the global population, but possesses 42 percent of the entire world’s "civilian-owned guns." And, places with more guns see more homicides. Conversely, areas with stricter gun laws have less gun-related violence. It seems so simple, doesn't it? But it's not.

Lawmakers in America have become infamous for not doing anything in response to mass shootings. Fortunately, that doesn't mean you have to stand by idly and do nothing. With the victims' families and friends in mourning and Americans watching the news in shock and horror, knowing how to take action can seem nearly impossible. But if you have a voice, a body, the ability to write, and a will, you can make a difference.

Our friends at Mashable published a comprehensive list of ways you can support the victims and families of the Orlando shooting, how you can stand by the LGBTQ community, and what you can do to advocate for stricter gun laws in the US. Check out the article here. Mashable will be updating the post as more information becomes available.

And now, here are some words from US President Barak Obama...