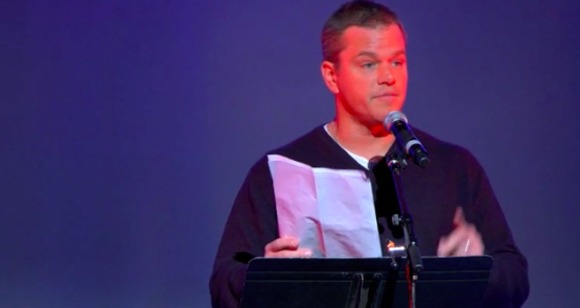 A video featuring Matt Damon on the anti-corruption site Represent.us is blowing up the interwebs today. In this presentation, Matt read excerpts from from a speech Howard Zinn gave in 1970 as part of a debate on civil disobedience.

"You're saying our problem is civil disobedience," said Damon. "That is not our problem. Our problem is civil obedience. Our problem is the numbers of people all over the world who have obeyed the dictates of the leaders of their government and have gone to war. And millions have been killed because of this obedience. We recognize this for Nazi Germany. We know that the problem there was obedience, that the people obeyed Hitler. People obeyed. That was wrong. They should have challenged, and they should have resisted..."

What do you think? Is society too obedient today?

This performance was part of "The People Speak, Live!" with Matt Damon and Lupe Fiasco at the Metro in Chicago, on January 31, 2012, produced by Voices of a People's History (peopleshistory.us) in collaboration with Louder Than a Bomb: The Chicago Youth Poetry Festival.