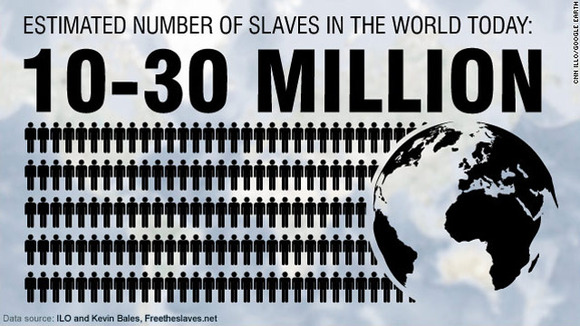 January is National Slavery and Human Trafficking Prevention Month. From sexual, web-based exploitation to forced labor in the cocoa farms of West Africa, child-trafficking persists as a worldwide injustice. Fortunately, there are freedom fighters in the world combatting this issue. Here are some organizations and initiatives targeting specific regions, and informing and activating concerned social activists.

Thorn, founded by Ashton Kutcher and Demi Moore, focuses on ending child sex-trafficking through research and development, deterrence, innovation and industry initiatives. According to their files, over 18 million cases of child pornography were filed in 2011, and three out of four victims are trafficked online.

As digital technologies increase access and facilitate predatory behavior against children, Thorn works to deflate this action by partnering with nonprofits and academic institutions to gain information. The organization also creates and supports tech initiatives to deter and disrupt child exploitation on the web.

UNICEF fights for child rights worldwide, and illuminates the fact that most child-trafficking conditions are buried among the rubble of corrupt industries. From construction sites to brothels, children are exploited, unpaid, and made to work in inhumane conditions.

Present in more than 190 countries, UNICEF partners with NGOS to provide a living wage for parents, while lobbying governments to develop laws to strengthen child protection systems and respond to abuse.

Wellspring Living focuses on drawing attention to and righting the following gross U.S. statistic that an average of 100,000 children are born in America being commercially exploited. Because many women and girls will never be rescued and receive the care they need to heal, Wellspring is dedicated to confronting  exploitation through training and treatment.

In her TED Talk, Mary Frances Bowley, the founder and President of Well Sr explains the shocking realities of U.S.v girls who are raped for profit and others who are forced to sell themselves. Know someone personally affected by this issue? Wellspring’s site offers an action kit and other resources to give you the tools to face this issue within your community.

Storytelling is vital for any movement. Like the Global Freedom Center, the CNN Freedom Project seeks to end modern-day slavery by illuminating the plight of slaves in Cambodia, Mauritania, the Ivory Coast, and others. Check out the site to learn important and startling facts about slavery and how it relates to current events and products many of us have in our own homes.